We’ve shown you Bangkok’s best hotel bars and its best family hotels, but this time we are back in Bangkok to talk about water. More specifically, the Songkran festival, a New Years’ holiday where it’s all about H20.

Are you planning a trip to Bangkok for Songkran? There’s a lot more to this festival than just getting wet. If you’ve never visited during the festivities before, here’s your guide to all you need to know before you jump in. 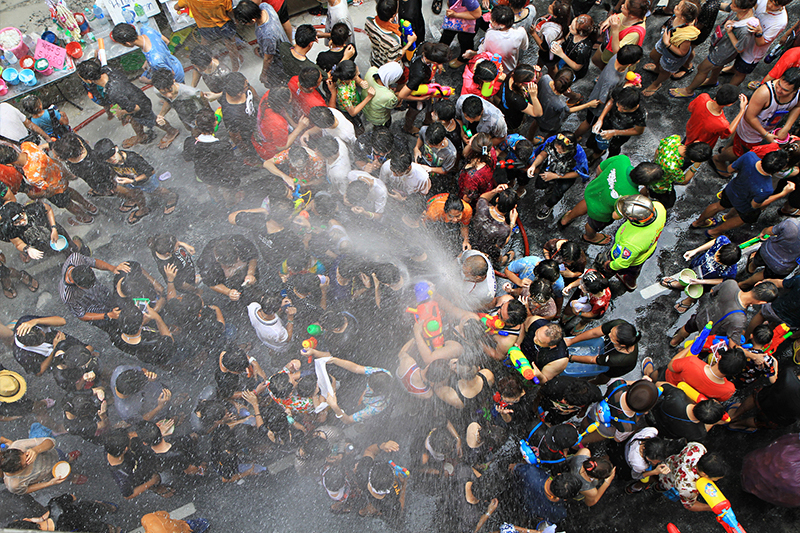 The Songkran festival actually takes place once a month

However, the one you want to go for is the main one, the Songkran Water Festival, which is held from 13-15 April each year to mark the Thai New Year. The event is celebrated all over Thailand, especially in Bangkok, Chiang Mai and Phuket.

Songkran originated from pouring water on Buddha statues for cleansing 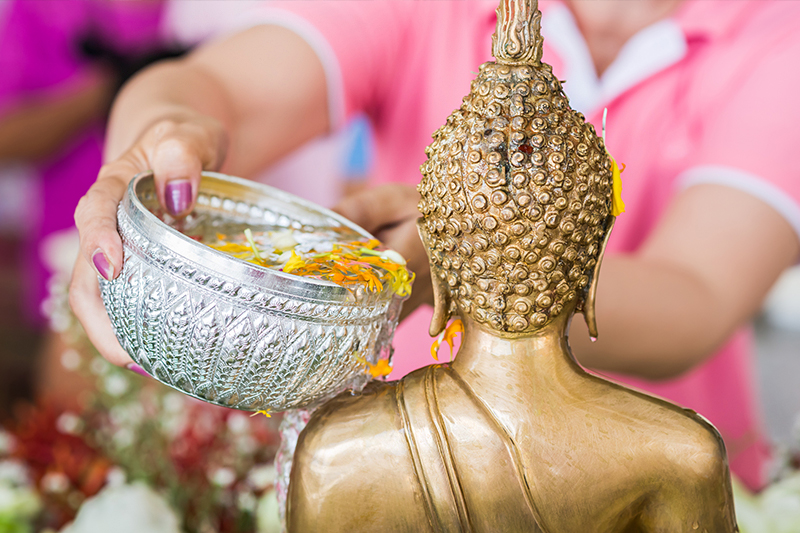 A Buddhist observance, traditionally the first morning of Songkran begins with ‘merit-making’, meaning doing some good by visiting temples and offering food to the monks. Fragrant rose water is poured on statues of Buddha, symbolising purification and the washing away of sins and bad luck, while the hands of elders are sprinkled with water by younger family members as a sign of respect. That’s where the water festival got its start. These days, of course, things have evolved quite a bit.

Nowadays, the Songkran festival is celebrated with full-on water wars in the streets. Major streets will be closed to traffic, so if you have to travel during the festival, make sure to find out ahead of time which public transportation options are closest to your hotel or hostel.

Find cheap hostels in Bangkok, from A$ 8

The Songkran Festival is fun, but you should be well-prepared if you want to fully enjoy it

This means factoring in your water-weapon of choice, what you’ll wear, and how to protect your valuables, as well as preparing a contingency plan for meeting up with friends should you be separated from each other amidst all the H2O frenzy.

Arm yourself with the right weapon 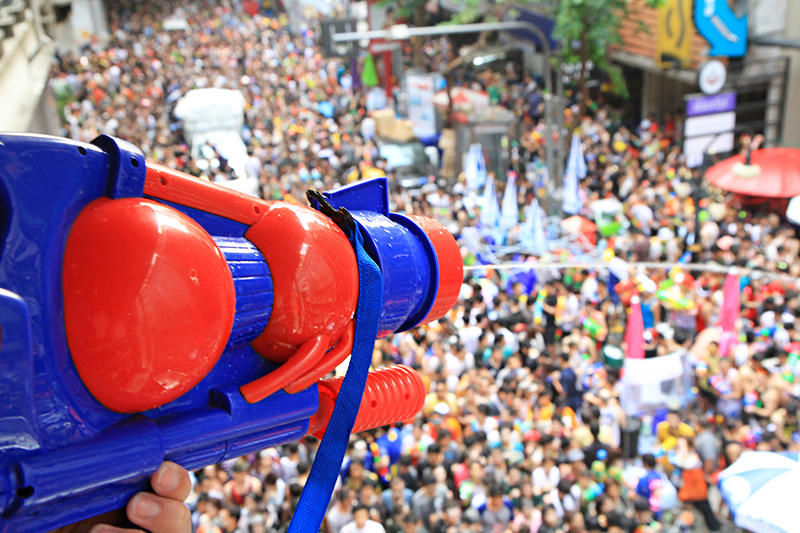 You’ll find lots of stalls selling water guns. Choose wisely as a small one may not be powerful enough, but a big one might be too bulky or bothersome to lug around. Remember that you’ll be up against locals who will throw buckets of water at you. You need something good enough to pay them back! 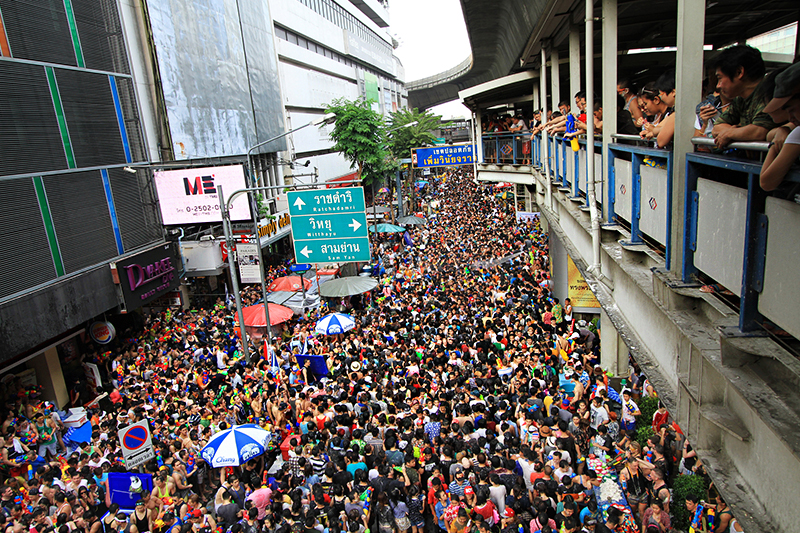 The best places to get some Songkran festival action are the backpackers’ area of Khao San Road and Silom, which is in the central business district, with the main water areas covering all the way from Sala Daeng to Narathiwat.

Find cheap hotels near Khao San Road, from A$ 12

Be sure to be dressed appropriately 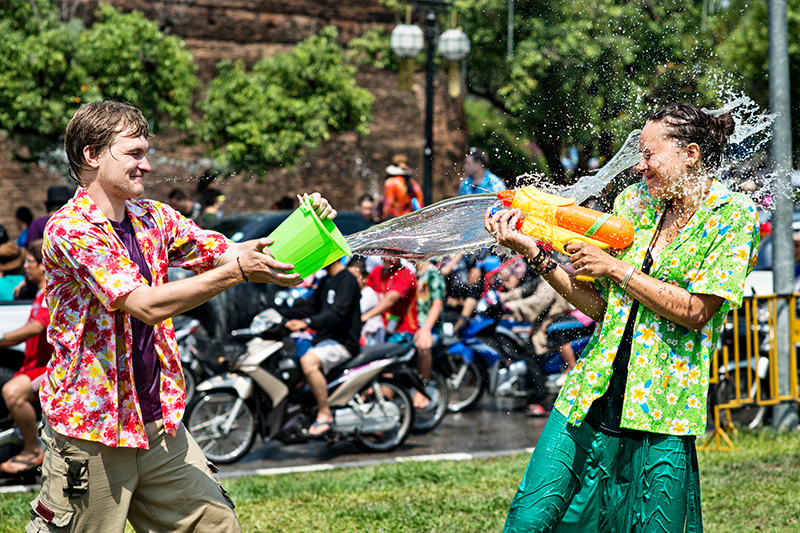 The best clothes would be whatever you would feel most comfortable with should you have to jump into a pool with your clothes on. A swimming costume under a T-shirt and shorts are recommended, though not short shorts, as Thailand is still relatively conservative outside of major party areas, especially during the day, and ‘indecent’ dressing is frowned upon. A man was once heavily fined for wearing nothing but shorts during the holiday.  The Songkran festival is fun, but it’s not considered an excuse to run around town in just your cozzie.

Protect your digital gadgets from water

Get a pair of safety glasses or goggles to protect your eyes from all the watery onslaught!

In case you lose your friends in the crowd… 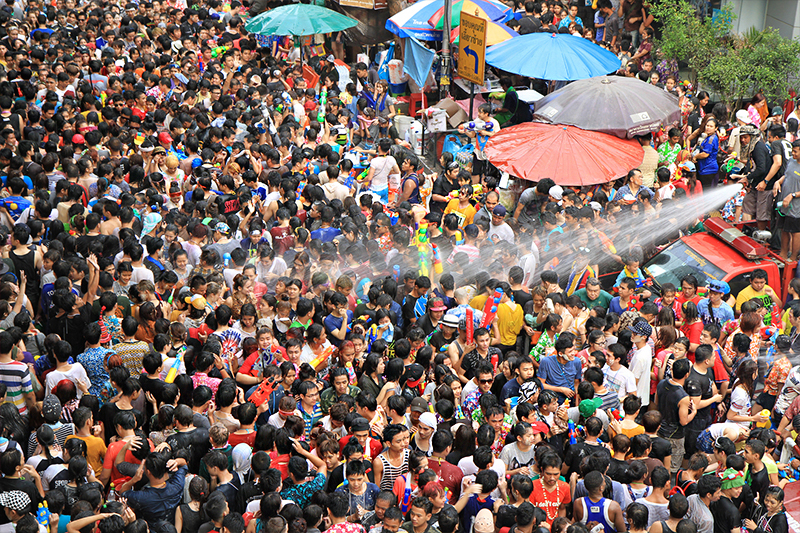 Work out a plan with friends to meet somewhere familiar away from the main water fight area at a certain time should you get separated from each other some time during the day, especially if you don’t have your phones on you, don’t have cellular service, or if one of you run out of battery.

Many people will be drinking alcohol during the festivities

If you will be doing so as well, just remember to pace yourself and drink lots of water as dehydration, as the heat of Thailand’s tropical weather and lack of food intake during this time could have you feeling tipsy earlier than you normally would.

Believe it or not, not everyone wants to join in the Songkran Festival

Whatever reasons they may have, it’s better to be respectful of the wishes of others. Survey before you spray. Use your instincts to see whether someone may not appreciate being splashed with water, especially if it looks like they’re not dressed for it and are trying their hardest not to get wet. If you’re one of them, and holing up in the hotel is not an option (and it shouldn’t be), you can avoid heavy water war zones by keeping to shopping malls and movie cinemas, and by getting to them in closed, air-conditioned vehicles. You can also head to one of the temples to see Songkran being celebrated in a more traditional, less wet way – with sand. During Songkran, monks build sand chedis – replica pagodas that are definitely a dryer way to appreciate the festival.

*Note: These rates are based on search queries made on KAYAK.com.au on 26 March 2018. The prices are quoted in AUD. Flight prices are based on results for a return economy flight search. Hotel prices are for double occupancy and include taxes and fees. Prices are subject to change, may vary, or no longer be available.

Pray For Love In These 5 Temples In Asia

If you’re still single and waiting to be struck by Cupid’s arrow, here are some of the most popular temples in Asia where you can go to pray for love.

When it’s almost time to tie the knot, why stop at one night only, for a buck’s party? Round up your mates, jump on a plane and head to one of the world’s best stag destinations. After all, you only get to do it once, right?

Grab A Refreshing Cocktail At These Gorgeous Hotel Bars in Bangkok

From rooftops to former palaces, these are our top picks for the best hotel bars in Bangkok that offer tasty Bangkok-tails after a day exploring the bustling Thai capital. Sit back and enjoy the view with a drink (or two!) in hand.

Many Bangkok bars are widely known for their wilder, flashy sides, but there’s a lot of character in the Thai capital, and a host of unique bars and speakeasies waiting to be discovered – if you dig a little. Here are our top choices for the best hidden places for a cocktail in Bangkok.