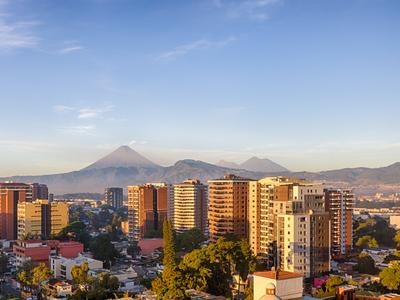 How long is the flight to Guatemala?

An average direct flight from Australia to Guatemala takes 39h 41m, covering a distance of 14022 km. The most popular route is Melbourne - Guatemala City with an average flight time of 39h 41m.

What is the cheapest flight to Guatemala?

What is the most popular destination in Guatemala?

Based on KAYAK flight searches, the most popular destination is Guatemala City (100% of total searches to Guatemala).

How does KAYAK’s flight Price Forecast tool help me choose the right time to buy?

KAYAK’s flight Price Forecast tool uses historical data to determine whether the price for a given destination and date is likely to change within 7 days, so travellers know whether to wait or book now.

Scores according to KAYAK customer reviews

Pros: "Nothing in particular."
Cons: "We took 2 United flights today... Both were delayed. Really annoyed by it. We took some other flights using AA and Delta, and both were on time. United failed horribly at it."

Pros: "Crew was friendly and courteous."

Cons: "My baggage was left in Houston"

Pros: "My daughter traveled as an unaccompanied minor overseas and was taken care of reasonably well. The staff in LAX were not as friendly but then I am just glad that everything was handled for her at such a young age being taken through such a big place. My daughter said she slept very little overnight due to a rude passenger who was talking very loudly and using a phone. But over all she was happy with the in-flight entertainment and I was pleased with the amount of baggage allowed at no extra fee."
Cons: "The staff were a bit impatient and rushed. Didn't seem to notice the actions of rude passengers."

Pros: "The arrive time was excellent. Courtesy and smile faces of the Crew in Business Class"
Cons: "The boarding process was ugly, in disorder and it is a big lie you have with your business class ticket the priority option. The food was very poor. I had to avoid continue eating because I felt the food was not fresh."

Cons: "It’s not their fault but the flight was delayed."

Pros: "I like that it was through United Airline, which I’m a member of so I got to board a littler earlier"
Cons: "The food could have been better. Everything had cheese which I don’t eat."

Pros: "The cabin crew were very kind and helpful, always smiling and happy to be of service."
Cons: "It wasn't Air New Zealand, but operated by United Airlines. The plane was uncomfortable, and the entertainment system seemed clunky, unintuitive and outdated. The selection of entertainment, poor in quality, I thought. There were lost of things to watch, but a lot of it was of poor quality. The food was acceptable, but again, it felt like it was done on-the-cheap, and I was eating airline food a la 20 years ago."

Pros: "The flight was quite smooth and left virtually on time. Boarding was simple and fast and the economy plus seats were extremely comfortable."
Cons: "The food was quite poor. United can learn a thing or two about food by flying Cathay Pacific to see what decent airline food is like. As far as entertainment is concerned, while United had a great movie selection the method of controlling the playback was quite poor. Pausing the movie would actually make it stop on several occasions."

Pros: "Nothing"
Cons: "They don’t care about their passengers one bit"

Cons: "Seats are really narrow and hard. They don’t recline much."

Pros: "The service at the automated counter was very good"
Cons: "Entertainment"

Pros: "The aircraft was spacious and well appointed. The crew MEL to LAX were very friendly and offered food and beverages at regular intervals, and walked the aisles regularly in case the passengers needed anything..."
Cons: "On the LAX to MEL return flight, the crew were very unfriendly and only did the bare minimum, and basically just asked 'chicken or fish" and "what beverage do you want", then almost threw the food and drinks at the passengers. The obviously don't enjoy their job very much."

Pros: "Flight attendants were pleasant."
Cons: "No snack or drink was offered."

Cons: "As common as this might be, I think 4 hours delay is the worst advertising for an airline. I completely understand things can happen but, what would happen if I show up 4 hours late? will you be ok with that. We gotta be fair. I think passengers deserve a compensation for this"

Cons: "My flight was overbooked could fly out until the next day"

Cons: "Booked on flight next day but much less convenient than original direct flight."

Pros: "Nothing"
Cons: "They charge de luggage, didnt gave anything to eat, the luggage in orlando came like 2 hours late. The flight back from Houston was cancelled with no reason, they overbooked the flight.. and worst of all the only offer us a $10 disccount in a cheap hotel.. no food nothing"

Pros: "Awesome Illy coffee and stroopwaffel cookie for my flight to Guatemala for my first medical mission trip on a snowy cold morning was a welcome snack. It was so much better than the snack mix or nut packs that you usually get."

Pros: "Schedule"
Cons: "My bag didn't came with came, it was a direct flying. The air conditioned was too cold"

Pros: "Nothing stood out except it was a new plane."
Cons: "Seating space. Where they could take an inch they took 2 or 3. First time I've ever had to get up on an airplane and walk down the Isles and stretch. They gonna learn bait and switch is gonna cost them in long run."

Pros: "The crew was very friendly and helpful, food was ok."
Cons: "It is uncomfortable, you can´t select a decent seat and there´s no entertainment, you hae to pay for it. There's suppose to be an option with mobile devices but when you make the ticket purchase it only says that entertainment is included in longflights and it is not. I paid for the entertrainment system but you have only some options and the movies start according to their own schedule so you can't really pick what you want to watch. And the directv remotes are not set in a good place, the are in the arm rest, so everytime the person next to you moves the wrong way they change your channel or turn the volume down or something else. For such an expensive and long flight the tiny space between chairs and entertainment lack is unacceptable."

Pros: "The Dreamliner is a very nice plane to fly on. Crew was friendly overall. Food was average. Entertainment was good. Blankets were too thin for a 14+ hour flight. I would fly this particular flight again though. Price was the best when I booked it."

Pros: "Didn't have to pay for in-flight entertainment. Plane boarding and exiting was smooth. No delays. Plenty of overhead baggage space."
Cons: "Stuff was not all that pleasant, seemed irritated at everyone, seats promote terrible posture, especially for anyone over 5' 7" it seems."

Pros: "Crew was very good. Food was ok; need to anticipate the more popular choices so there's enough to go around."
Cons: "New Dreamliner has added more business seats resulting in loss of storage space as well as space for your feet when fully reclined."

Pros: "Nothing"
Cons: "It was oversold so they booked another flight on American that still hasn't even left Dallas! Should have arrived by now."

Pros: "They definitely had more viewing choices in their entertainment than anyone could watch."
Cons: "The two big complaints are the food which was quite pathetic for a 14 hour flight - half of a cold sandwich and one cookie!!! Really?? They need to fly their competition and see how it should be done! The biggest complaint of all is their slight of hand baggage charges. If they're going to partner with another airline, they need some communication and agreement about pricing and allowances. Even though we are United Club members and credit card holders, we were charged nearly $400 to bring our luggage home, after paying just $30., yes, thirty, on Air New Zealand to take two extra bags! United's own overseas policy allows two bags, but they charged us anyway on return because we came on an airline that only allows one even though we paid ANZ to bring extra. Extremely illogical."

Cons: "There was a grumpy mail air host. Vegetarian option was offered to everyone and hence none left for reminder of journey"

Pros: "Friendliness of the staff"
Cons: "Nothing"

Cons: "It was delayed 3 hours"

Pros: "Left in time"
Cons: "The plane was so unbelievably hot. The air hardly blew out of the vents. Also, they left the lights on the entire time on a flight that left at 10pm and arrived at 12:30pm (11:30pm local time). It made for a very uncomfortable ride"

Pros: "Friendly staff, great service."
Cons: "The boarding for handicap is not good,should be the first one on the plane.."

Pros: "Kindness of crew"
Cons: "Flights were delayed, no entertainment... Only pay-per view... No free food..."

Pros: "Things were going well until the pilot had us get off the plane."
Cons: "Flight was cancelled. United couldn't get me out until Sunday. So I rented a car and drove down instead."

Pros: "The crew. The cheese plate."
Cons: "The TV kept going off. No news channels available."

Pros: "Nothing"
Cons: "They didn't event get drinks out to the whole cabin from Newark to Boston. Paying for Internet was ridiculous for all the other fees I had to pay. There was NOTHING to o on the plane at all with out paying for it."

Pros: "Free movies and TV shows between Newark and Houston"
Cons: "That the first checked bag is not complimentary."

Pros: "Food was ok reclining seats worked not much else."
Cons: "The reclining seats only work if you are shorter than 187cm I'm taller and so I had to bend my knees as there is nowhere else for your legs to go! The Chardonnay was warm - when served with tasty smoked salmon turned me off. The pillow was a $2 one lumpy and next to useless it's too big for the room you have. My entertainment system was reset three times and it still didn't work properly - no sound and no ability to watch movies that were not child rated. Stewards have to learn to be quiet as some of us are trying to sleep on a 15 hour flight and aren't interested in their laughs and jokes as we are travelling business first because we have to go to work when we get there!!"

Masks required on board, masks provided on flights to Guatemala

Middle seats unavailable to book on flights to Guatemala

Testing for antibodies, testing for symptoms for flights to Guatemala